How much should you pay remote employees? 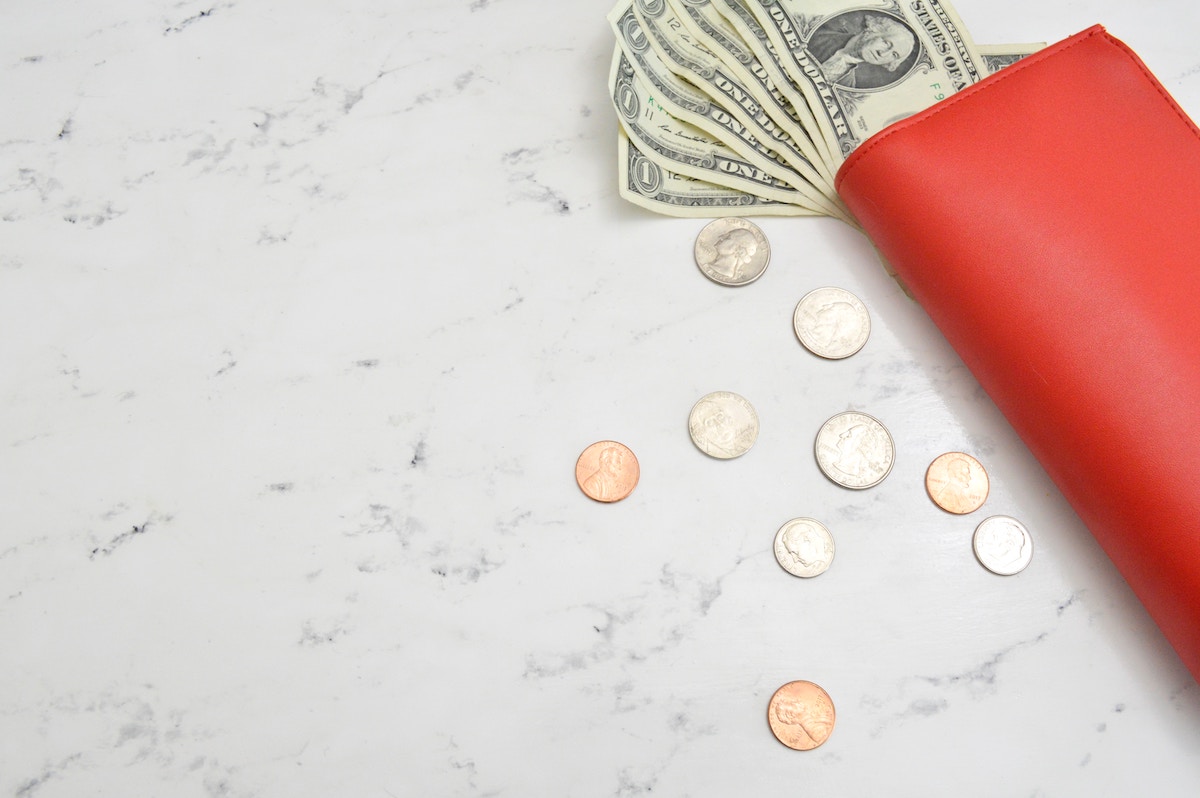 Deciding salaries for remote employees can be hard. As an employer, you have the hard choice to make whether you're going to pay people as much as where your office is located, as much as the salary levels in a specific city, pay them their locally suggested salaries or establish a global default.

The sad truth: There is no right or wrong. Someone living in a high cost-of-living country will want to see their local salaries being paid, whereas people in lower cost-of-living areas would much rather see global levels or the same levels as in the nearest city. So what's the right way?

The case for a global standard

In one of our recent surveys, 32% of remote employees and founders said that their employer is paying them a globally standardized, either based on a headquarter location or the salary levels of a specific city. The most prominent example of this is Basecamp, where employees are paid at the top 10% of the market rate in San Francisco, even though none of the offices or employees are in San Francisco themselves. Whether someone decides to actually live in a more expensive place like San Francisco or takes their extra cash somewhere to the Midwest or Eastern Europe – the savings are theirs to keep.

As an employee, there's nothing to be mad about here. But even as an employer, this has its advantages. It gives your employees the possibility to work from anywhere and doesn't involve any of the pain of re-calculating salaries on a monthly basis whenever somebody moves places. There are no unbalanced dynamics forming because of unfair salaries – everyone gets the same level of salary, only dependent on role and experience. 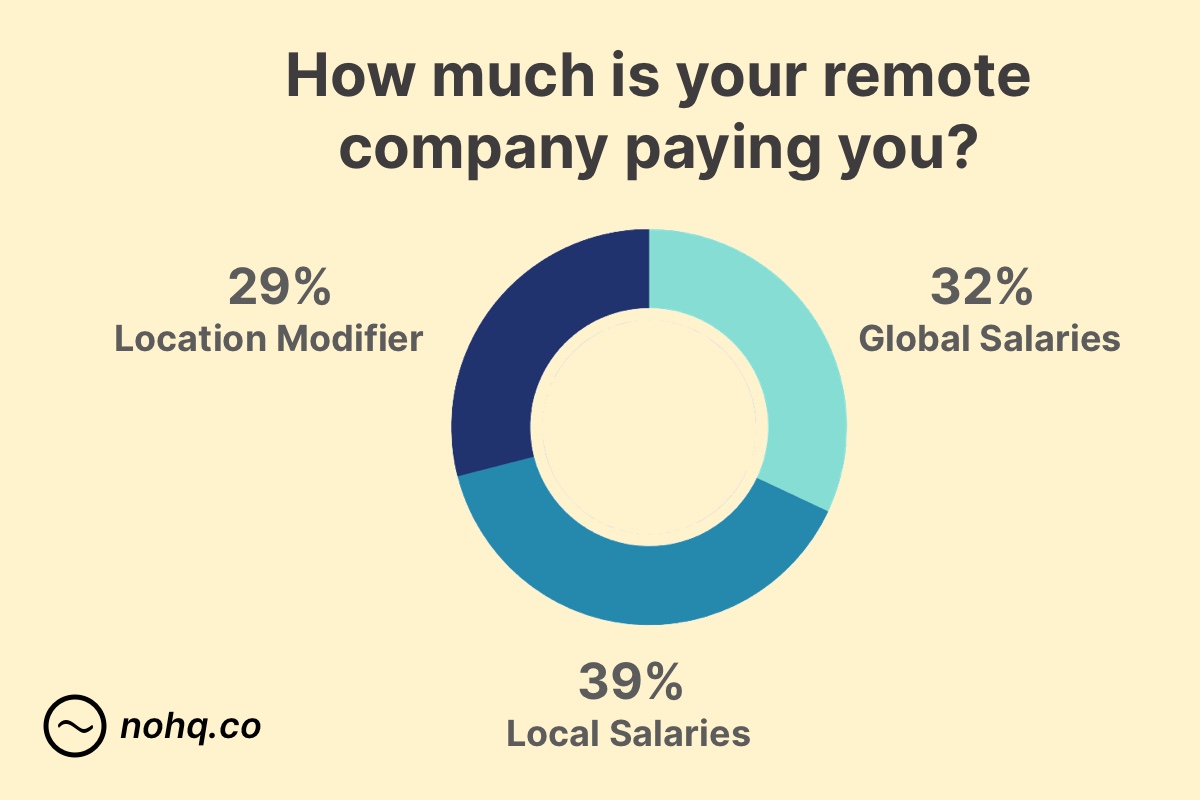 While more expensive (usually), this also gives companies a great competitive advantage in the hiring markets. In industries where hiring is becoming exponentially more difficult – for example in software and tech – offering this location independence and higher salary levels are attractive to even the most experienced talent on the market.

The case for paying local salaries

The survey says: The majority of companies still opt to pay whatever salary is local. This makes sense – you're paying people what they'd usually earn in their home country or region. This doesn't hold the same competitive advantage as paying everyone top prices, but with a company hiring remote, that's often already enough to convince really great talent to join you.

What often happens, especially if a company from a higher cost-of-living place hires someone in a lower cost-of-living place, is that companies are comfortably able to pay 10%, 20% or even 30% above market rates anyways. This can be an amazing middle way but often depends on the circumstances.

The big downside? Payroll is about to get a ton more complicated! If you are paying local salaries, it's also up to you to take up new contract negotiations anytime someone moves. If someone doesn't agree to those changes, you really only have two choices: Pay a ton above-market or void the contract. Both are probably not in your interest.

Plus: You need to have contacts and sources that reliably let you know about market rates in each country. If you don't, you run into the danger of offering too little and lose talent or offer too much and create an unbalanced environment again.

Obviously, the great thing is that there's really nothing left to be open with this method. People are paid local rates at a fair level, it makes sense and there's no place for confusion.

The case for a location modifier

Companies that have opted for location modifiers in the past have created a repeatable, public competitive advantage for their team, by being transparent about their salary formulas and sometimes even publishing it! But, what is a location modifier exactly?

If you are using a location modifier, it can be assumed that salaries are not exactly a thing up for negotiation. There's a formula either public or private that allows HR to push in your info and get a number back. With a location modifier, the location is just a part of that calculation. 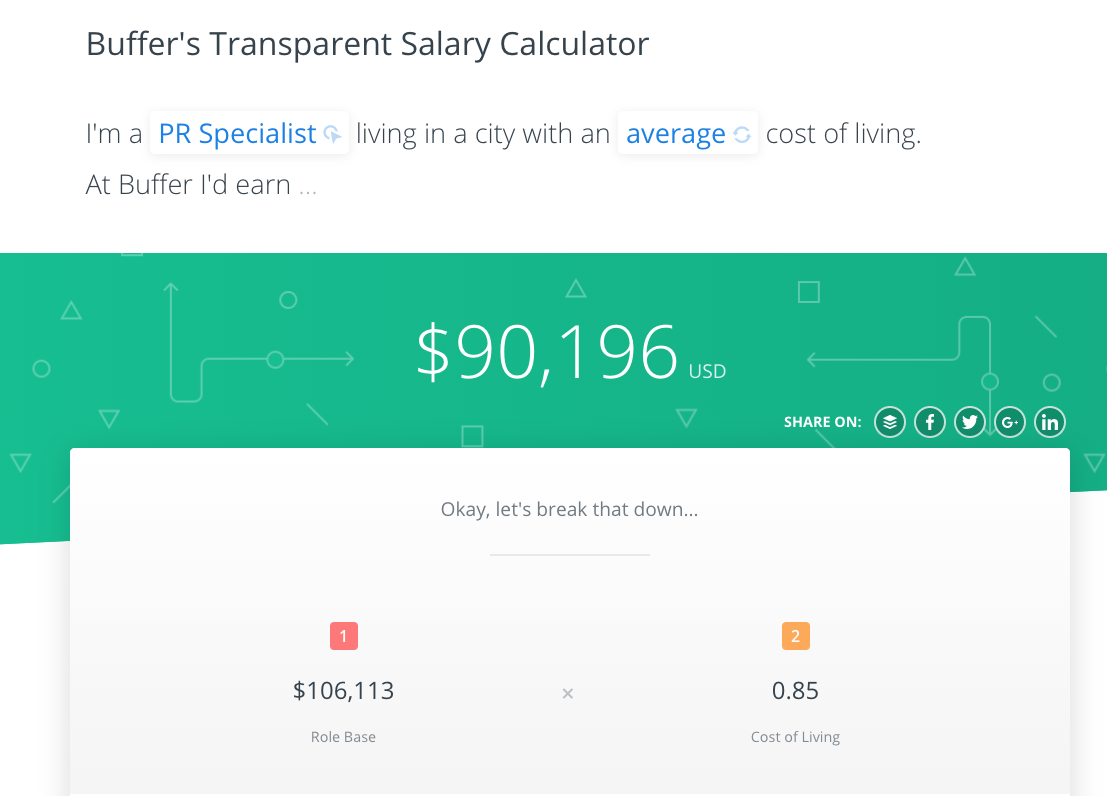 A popular example of this is Buffer, with their Transparent Salary Calculator. Based on the cost of living (in this case low, average and high), they apply a multiplier to the base salary. That means that people doing the same job with the same experience may get a different salary, but things are transparent and clear – and there's always the possibility to move and push the formula in your favour.

The big advantage of using a framework like this is that there's no room for imagination. People know how much their peers earn and what flows into the salary calculation. This also helps to bridge the pay gap – if people know how to earn more, they are able to optimize for that, if they wish to do so.

Remote companies tend to have one problem that co-located ones can only dream of – too many job candidates to choose from and figuring out who to pick in the sea of global candidates. Don't let that stop you, though! Here's how to successfully recruit for remote positions.

The 101 of hiring remote employees

Hiring in a remote setting can be tricky. There are a lot more things to consider and think about. We list the main ways to get people hired globally.

Hiring employees in your own country is fairly simple. The only real differences may be between state or regional taxes and regulations. But if you want to hire remote workers in foreign countries as employees or contractors, then it becomes more complex.