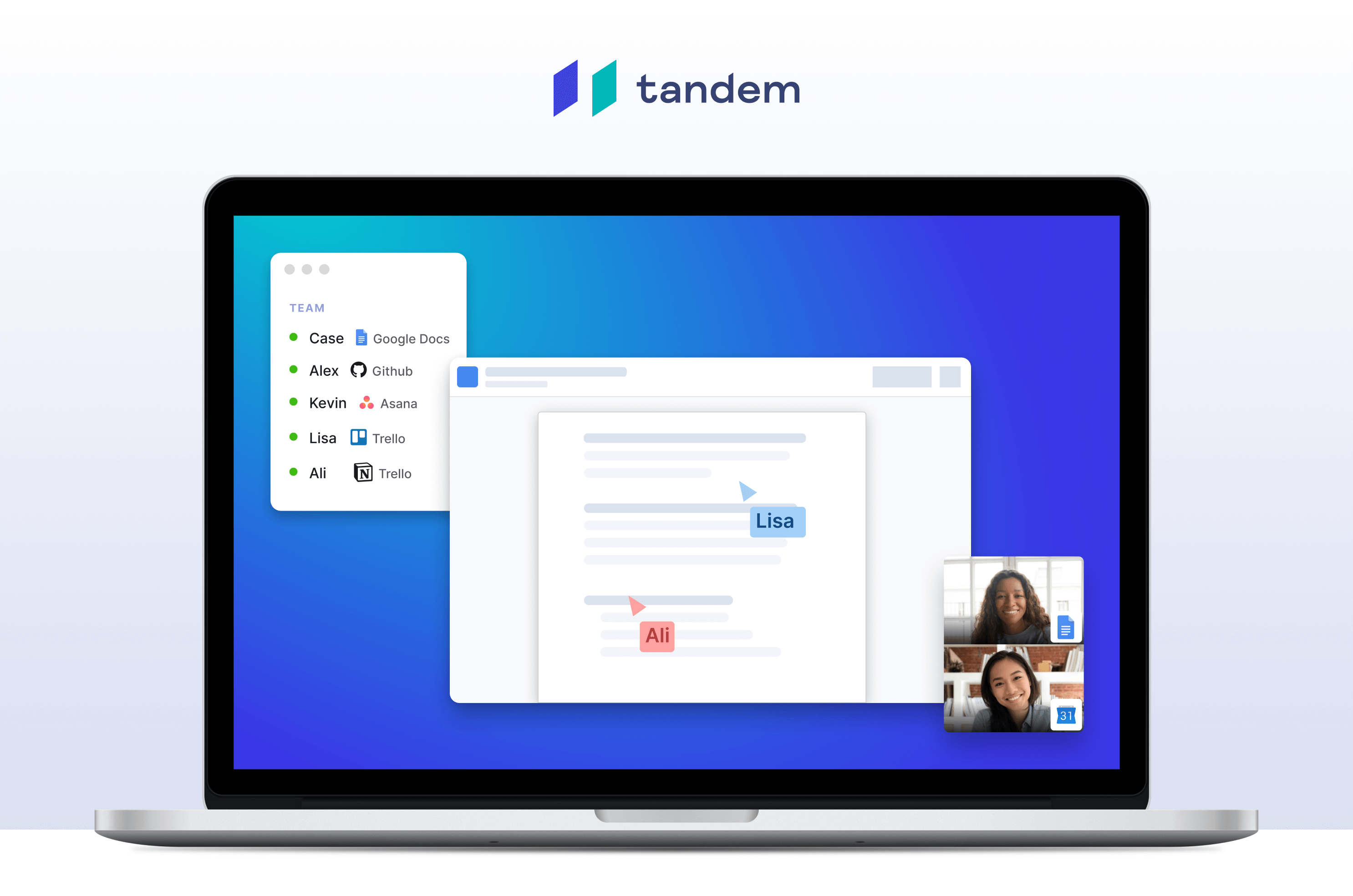 On the search of more seamless collaboration, some remote work tools go a longer way than setting up yet another Slack clone. Virtual offices are opening up their doors to the public and increasingly we implement popular social loops like stories or Snapchat-style messaging into our apps, and yet, some tools just want to push the envelope a little more. Tandem is one of those: A collaboration product that almost feels like its own operating system.

Testing out Tandem, it does feel like a different collaboration experience, something that isn't close to anything familiar in the collaboration landscape of the past decade, but is it practical as well?

What's the hype around Tandem?

Tandem has publicly launched in July 2019 as a freshly minted YCombinator company. As with most YC companies, that generates a lot of hype. Stepping into the footsteps of Airbnb, Dropbox & co., the usual question is: What makes this so great? Tandem was highly anticipated for a long while, so a year later seems like the best time to get back to it, and see how things really are. Looking at it, it still looks as promising as ever, and seemingly not much has changed from the outside.

The promise of Tandem was quite straightforward from the start: It's a virtual office for remote teams. Other than Remo, for example, that doesn't need to mean that there is a graphical UI that displays different office areas: It simply means that it's meant to bring folks closer together, kind of like a virtual office is supposed to be. 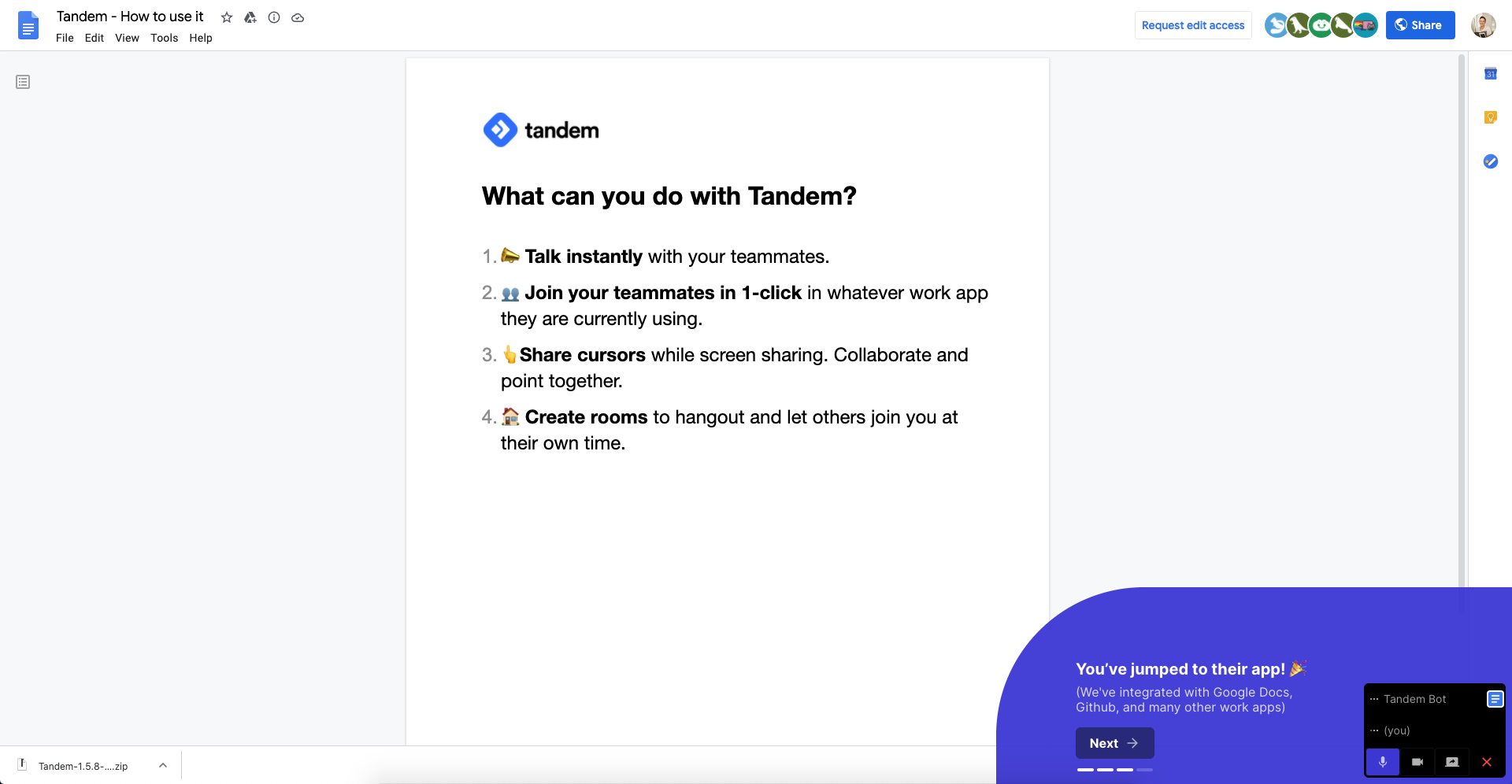 And even in its early version, it did that very well. By displaying the current work apps that are being used and making it possible to jump into calls with someone with a single click, it almost feels like someone is able to tap your shoulder, see what you're working on and chime in. Whether that is a good thing for productivity may be up for debate – but it's not a common occurrence to have an experience that comes this close!

Behind Tandem is a skilled founding team that consists ex-designers, data scientists and engineers of Yahoo. Other than many other apps in that space, it's a product built by a remote team, for remote teams specifically. It's no coincidence that Tandem has made so many headlines: It's a new take on an old problem that is yet to be solved: collaboration and spontaneity in remote teams.

The app integrates with a suite of collaboration apps like Google Docs, Asana and Trello, making it able to collaborate in-app with each other, no screen share needed! This kind of native integration is again something that we don't see as often and therefore feels refreshing and new.

That seems to be the main selling point – at least to me – for Tandem. It doesn't feel like yet another communication app, but a native extension to the operating system that has collaboration baked in. It's refreshing to use, fast to interact with and isn't an eyesore, which are pillars for great product experiences and ultimately a desire to use the app. 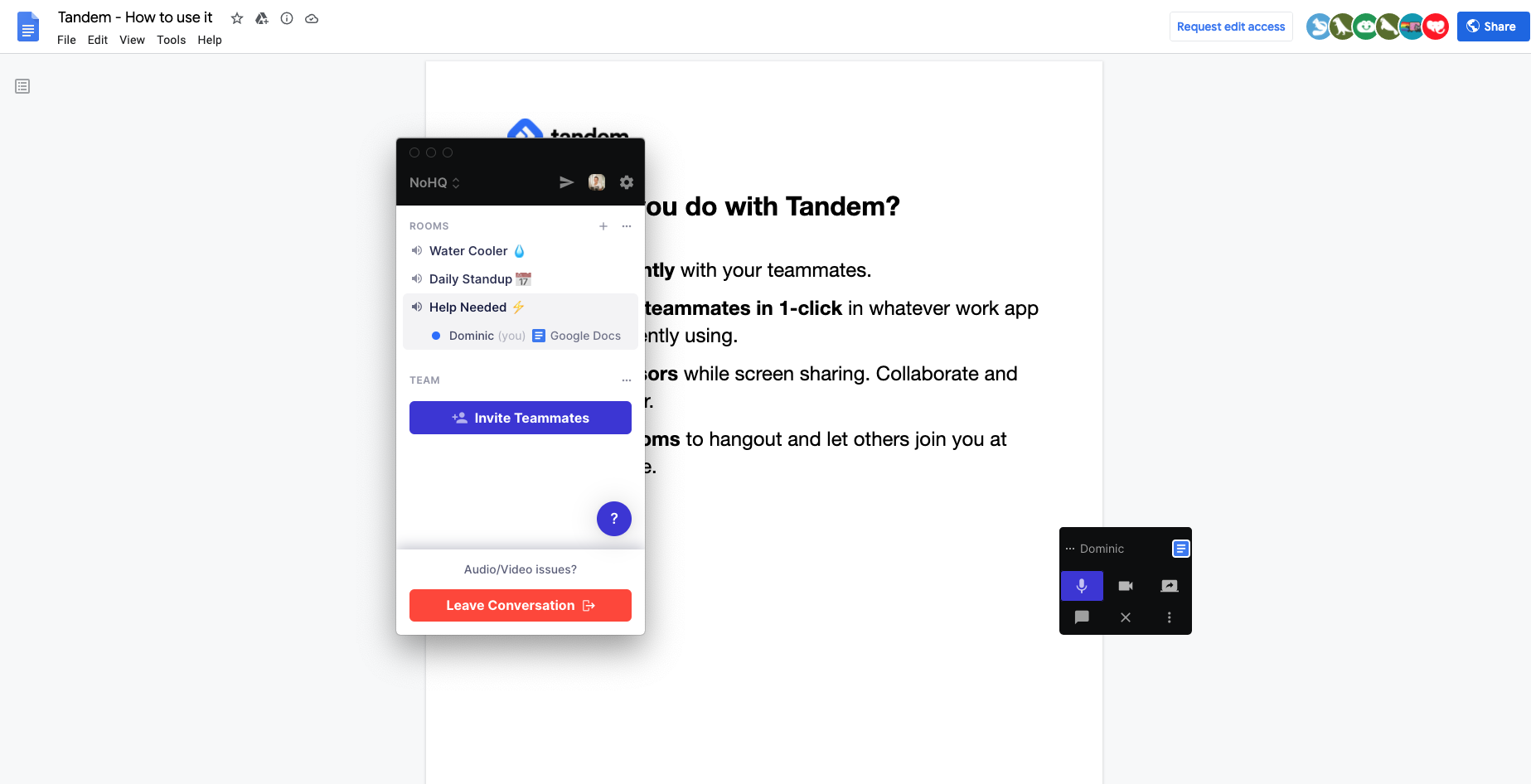 It's also the main point why Tandem is not competing against giants like Slack or Microsoft Teams. I wouldn't feel comfortable with moving my organized team communication entirely onto Tandem. Instead, it's a tool to co-ride with your coworkers (hence, the name), get the full context of your workgroup, and be able to get in touch with them quickly, just like it would be the case in a real office. Written communication is going nowhere.

How can deeper links help us in the future?

The appearance of these deeper linked tools like Tandem, but also tools that experiment with different appearances like the face bubbles from Remotion or the communication sidebar from Yac also makes the more exciting. They provide something that makes them different from 'yet another collaboration tool' and are a sure way to get you headlines, attention and investors. But are they productive?

What they do well is to reduce the sense of isolation, one of the most common difficulties of remote work. There is also an argument to be made that, due to its integrated form, it might be less prone to over-checking and time-wasting.

However, the deeper the integration into the main operating system, the more difficult it becomes to shut it down. As I close Tandem, it stays in my menubar. I am still available for everyone, might even still be shown as online. When I close Slack, my e-mail account or Twist however, I am gone and not present anymore. That's important. 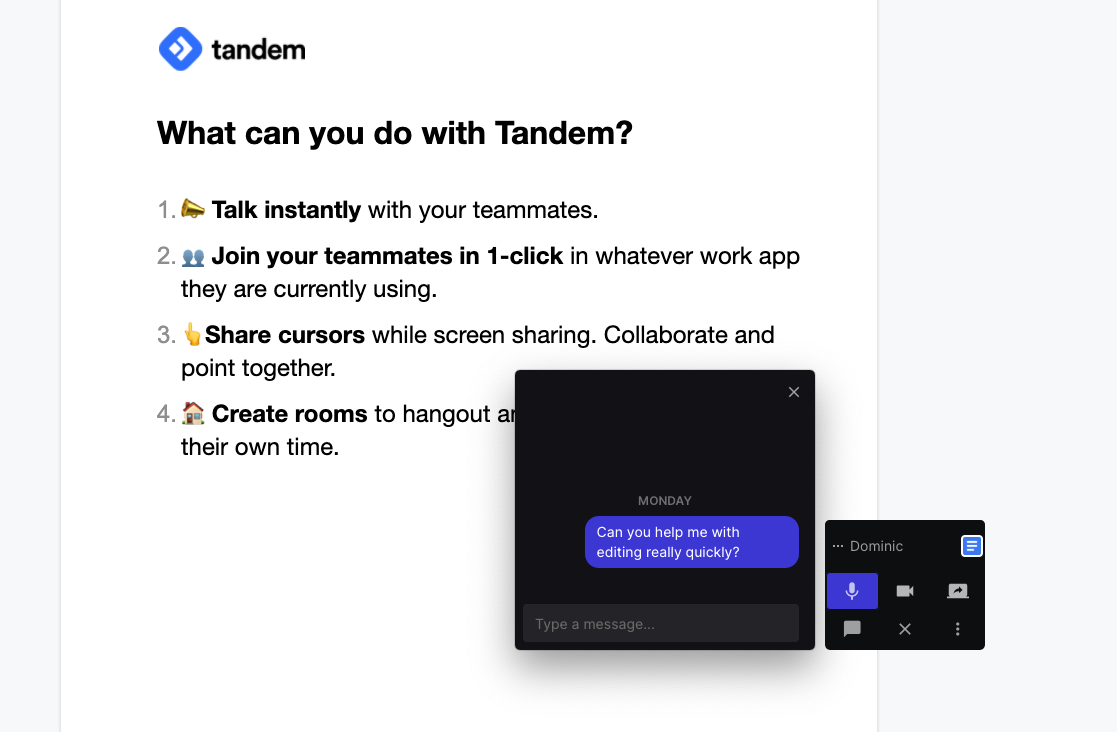 It leaves some room for imagination as to how our future work apps might look like. Could Dropbox start to integrate tightly into our OS to replace the local filesystem and make machines more share-able? Could Slack messages start to show up as an overlay on your screen (uh oh, better not)? Will our future operating systems maybe just live in the browser instead?

Security and architecture concerns aside: The future of work is a great place to start with the future of our operating systems and to create a change in how we interact with our machines. Tandem is making a great start with that, but it shall not be the last one. Window-based communication and collaboration systems are too isolated, the feeling of connection that they should emulate is hard to feel, that's what Tandem does right. Excited to follow this one along.

Skuad is a global HR compliance and digital payroll platform that enables companies to build diverse remote teams, seamlessly. Skuad manages everything from international payroll to local compliance — so that you can employ contractors and full-time employees, anywhere. Our global employment infrastructure enables companies like yours to instantly hire and onboard talent in over 160 countries, across APAC, Europe, America, and Africa.

Remotion is a virtual co-working suite. It’s a MacOS app which runs as a dock on the side, top or bottom of your screen. It gives you instant access to anyone you work with in the form of audio/video calling and basic ‘who’s online and what are they up to?’ availability management. Think “Clubhouse for your internal teams”.

Panther: “You should be able to work with the best talent, regardless of location”

Panther is the easiest way to hire, run, and pay a team that works from anywhere. By taking care of payments and compliance in 160+ countries, Panther empowers distributed teams to work with the best talent in the world. No matter where those people live.